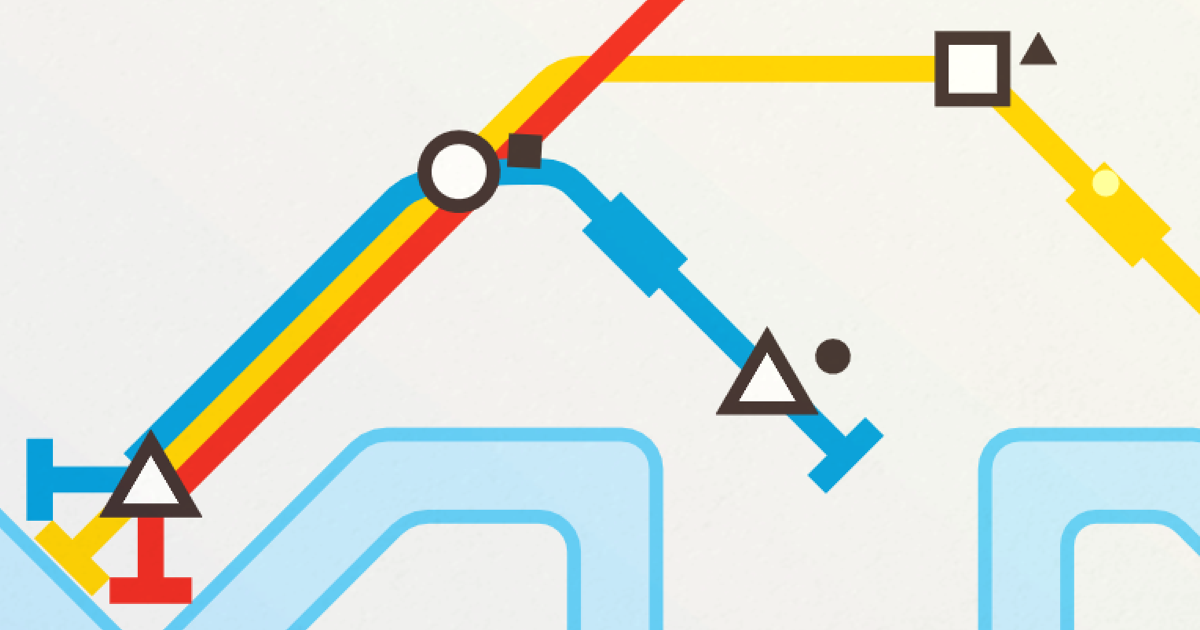 Mini-Metro is a strategy/simulation game currently in Early Access on Steam Greenlight. The game revolves around keeping a city’s subway network running by placing new lines, trains and carriages. At face value it looks pretty straightforward and simple, but don’t let its looks deceive you; there’s a lot of skill to mastering this game!

The visual style of Mini Metro is similar to that of actual metro service maps, utilising straight lines, simple colours, and shaped stations. Stations come in a few shapes; the common shapes are Circles, Squares and Triangles and then there’s some more exotic ones that we’ll get onto later. When the game starts, you’re presented with three stations to start off with, one square, one circle, and one triangle. Passengers randomly appear at each station, and they want to travel to a specific shaped, not a specific station. This is an important thing to understand when you come to play the game. You have 3 trains and 3 lines available at the start and you use your mouse to draw tube routes between the stations. Tube cars travel along these lines picking up and dropping off passengers as they go. As the game progresses, more and more stations appear and occasionally these stations may be unique shapes, which presents the interesting challenge of having to be able to get a passenger there from any other station (stopping you from just making unconnected loops of square/triangle/circle). 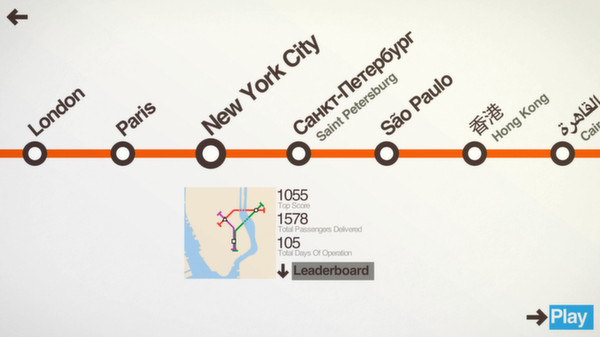 Mini-Metro’s uses real city maps, but the stations are in random locations. Each city has its own unique characteristics (for example, Osaka features the Shinkansen or the Bullet Train)

The game has three modes, which are currently called “Normal”, “Endless” and “Extreme” (but these probably aren’t final as they’ve changed a few times during development). It’s pretty interesting how these three game modes manage to make the game cater to almost all types of player.

In Normal mode, ‘time’ passes in-game and you receive a new line, train, carriage or other bonus at the end of each week. The goal is to stop stations overcrowding. If a station overcrowds for too long, you lose.

In Endless mode, stations do not overcrowd. Instead, you aim for efficiency (measured by the number of riders per week). You get your bonuses (lines, trains, carriages etc) when you reach certain efficiency milestones. This is more of a Zen mode. You can’t lost this game mode.

Extreme mode is similar to Normal mode but stations appear a bit faster and lines can’t be undone once you’ve drawn then. There’s a lot of action (and stress) in this game mode.

The overall visual feel of Mini Metro is great; it’s like you’re interacting with a real tube map. The minimal, flat graphics are really clear and the colour scheme is great. It’s a really fun, minimal experience and the graphics really suit the game. We also love how this game achieves great levels of depth and strategy than most casual games we’ve seen before this. The game is updated very regularly; features are added, bugs are fixed. It’s easy to tell the developer really cares about this game and is putting a lot of time into it. The game has a very compelling feel to it and it’s a fresh idea that’s been executed very well. Even though it’s tricky to figure out the best routes, even those stressful parts still feel relaxing.

What’s not so good?

Okay, so before we mention these it’s important to remember this game is still in early access; it’s not finished. Still, these are a few things we think could be improved:

There’s a general lack of information provided in the UI and other areas which means there’s a lot of guesswork involved in finding out what each setting does, which gets a bit confusing the first time you play the game. However, we think this might just be because things are changing about so often in development that it’s just not worth writing the descriptions yet as they’d have to be changed so often.

Another thing we’re keen to see is where the sound goes. Currently the game doesn’t have any but the developer is working on sound effects and Disasterpeace is working on a soundtrack. The music has a huge impact on the feel of this type of game and we’re a bit anxious to see how it turns out.

What do we think?

This game is one of those happy games that looks simple on the surface (and can be played simply if you wish) but has layers of complexity for those who seek it. All while keeping its casual style and appearance. By all accounts this is a casual game and would probably do well on an iPad, but it’s so high quality that we think it’s easily earned its place on desktop. It does a great job of both relaxing you and getting you to use your brain. This is a fresh idea which has been executed in a very polished way, it’s clear to see careful thought and planning has gone into all parts of this game and it’s on track to be a strong 9/10 so far. This is a game we’ll cherish and return for 20/40 minutes of gameplay on and off for a very long time.