Guns, Goons and Gobbleydygook: An Enquiry into the Stupidity of First Person Shooters. 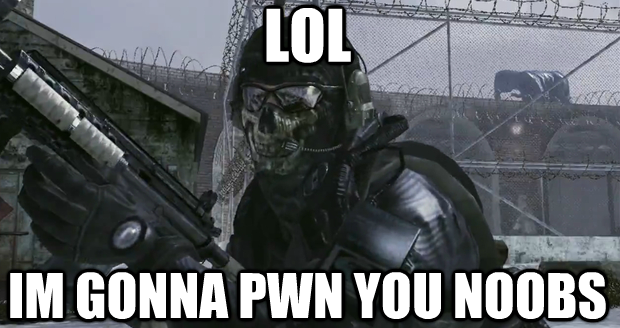 I have no bloody idea what this means

I can say, without fear of contradiction, that I am terrible at competitive first person murder games. I enjoy them nonetheless but it does get remarkably disheartening when you are killed within five seconds of loading into the game. My repertoire of these games is limited I will admit, I own the first Modern Warfare game, two copies of Battlefield 3, Halo 3, Counterstrike: Global Offensive, and Titanfall. The latter has been the one that I have got the most fun out of simply because I can have Netflix on in the background. So sit back and read through my opinions on electronic Christians vs lions!

Many among you might guess that I am not the demographic for these games after my last article and you would be right. I cannot aim to save my life, quick scoping (whatever that means.) seems to do more harm to me than good and I never once managed to call in a UAV when playing Modern Warfare. That is beside the point however, from the five games I find it very difficult to differentiate between them all. They all merge into one big muddy and bloody blur filled with salacious remarks and a rather liberal use of the apocryphal word “faggot.” I absolutely hate that word and have been called it many times before so as a little side note if I could urge people to never ever use that word whilst they have breath left in their body, I would be most grateful.

The Call of Duty franchise is not well liked by the staff at Subliminal Realm, they much prefer Battlefield, but I must cover it for the sake of the piece. I remember my first attempt at playing Modern Warfare online, it was my 16th birthday and a friend of mine had given me a copy after learning I had never played it and become thoroughly perturbed by the notion. I loaded up the game then waited almost two hours for it to update since it was on the Playstation 3. When it finally finished I joined a lobby, brimming with excitement like a child on Christmas morning. Within ten minutes I had died thirteen times and got one kill and even that was because I accidentally threw a grenade at the enemy. Now you may think that this is because I charged into battle like the plucky recruit leaping from the trenches. Oh no, what actually happened was someone waiting at the spawn point and shooting me in the head. That or a stupidly accurate sniper on a rooftop that it seemed was impossible to get to within the bounds of physics. Then the match ended and through my headphones came a flurry of expletives from my team that would make a Tourette’s sufferer blush. But much like Lazarus in the Bible I kept at it and by the end of the night I had been called every name in the book and more that I shall never repeat in my life. I played through the campaign after that, thought Captain Price was alright and then turned it off never to be played again.

Next came Battlefield 3, a game I bought first on PS3 so that I could get money off the Darksiders 2 limited edition. The campaign was worse than watching paint dry and even then you get to see some progression. Allow me, if you will, a moment to explain the plot of Battlefield 3: shoot foreign people for bugger all reason. There may have been a reason but I switched off after one too many patriotic noises that sound like they belong in a ‘Carry On’ film. Then I attempted to load up the multiplayer and was told that I needed an online pass in order to play. After a nauseating hour of battling with that infernal DRM software and a few trips to Google I found that for some reason my serial number had become invalid and I needed to buy another one. That swiftly joined Modern Warfare in my “Never play again” bin. About a year later a friend of mine was given a free copy, did not want it so gave it to me. This version had a working multiplayer which was nice. The only downside was that you are required to go through Battlelog, or whatever it is called, which works as well with Google Chrome as steak knives do with toddlers. I have played a few games online with the other members of SR and we do generally enjoy ourselves, occasionally we manage to play without Battlelog needing to update and even on the rare occasion do I get a kill, usually whoever has the highest ping or had to get a drink mid-way through.

Halo 3 was an odd beast. It was the first shooter I ever played and took me ages to realize that you could not use stealth. It was the first game I played on my Xbox 360 and I finished the campaign in about three days with only a few missions standing out. Most of them were when the Elites were involved or there was some nice cut scene involving the Covenant. At that time I did not understand that in order to play online you needed Xbox Live Gold so spent ages trying to get onto a multiplayer match and failing miserably due to my own blissful ignorance. It took about a year before I finally played it online and I can say that I was unimpressed. I know a lot of people like it and say it is a stellar example of people killing each other online but it did not float my proverbial boat. I was much more interested in the story so just replayed the campaign on the hardest difficulty so I got to see more of the superbly designed Covenant enemies.

The first Steam Summer Sale I encountered had a lovely little bundle containing all of the Counterstrike games including the latest one. Another friend of mine bought it for me and I put, according to steam, seven hours into that game. The last time I played it was the 21st of December 2014 (It is the 4th of August 2015 at time of writing.) I can understand what it was trying to do but I did not enjoy that game. A game should be played for fun, not to test whether you have more frames per second than a man from Iceland at 4 in the morning. To me, that game is not fun and probably never will be.

It was not until I had a better computer that I downloaded Titanfall for the free 48 hours that EA Origin gives you. As soon as I started playing I realized that I should have bought and played it earlier simply for the titular titans. They added something that I had not experienced before, I hazard to say asymmetric gameplay in that everyone eventually gets a titan but at first it feels like whichever player gets there mechanical eidolon first will dominate until the enemy can retaliate. The smart pistol was a lovely addition too since it meant that I could do my usual thing or running away and then getting enough little red blips on the screen to mean that I get a kill, even though I am up the side of a building. Sadly by using it you do get some rather…choice comments in the chat afterwards.  There is still the issue of it camping spawn points and what not but overall I found it enjoyable especially with the introduction of Qi on the second day. Of course there is still the issue of the game getting repetitive and no amount of Stephen Fry’s beautiful rhetoric can stop that. Although I had fun playing Titanfall, robots do not excuse monotony.

From reading my comments back to myself I realise that I am overtly negative about three of the game I have covered in this article. I should reiterate that FPS games were not made for me and vice versa but it comes the time for me to explain my major gripe with them as a whole. They are all the same. You have a gun, you try to shoot people, you die, and you try again. I can assume that most First Person Shooter developers use this as a mantra. It is not dissimilar to the Warboy’s chant from Mad Max: Fury Road – “I live, I die, I live again.” The only discernible difference is the setting and how well the engine can render some brown. If someone can find a First Person Multiplayer shooter that is any different to this then I will gladly eat my hat or write a follow up article to it, whichever is easier. I will not accept one where you have a bow and arrow or some such instrument of ranged death-bringing over a gun either.

I am a pacifist at heart. I do not relish the idea of violence in real life but in video game, I can handle it. A group of pixels is different to a person. And as I sit here listening to The D’Oyly Carte Opera Company perform ‘I am the Very Model of a Modern Major-General” I feel something is missing from these virtual generals who have over 9000 kills to their virtual name as they sit in their virtual prowess, living on a virtual battlefield and who are important to virtually no one.